Ceridwyn was a story concept that I have been working on. It is based on misspelling or misinterpretations of words. This is quite ironic as I am such a bad speller myself. My drafts are full of mistakes and I’m quite sure that any regular reader of this blog will have spotted quite a few.
Anyway, Ceridwyn is a witch who has magic fun with the linguistic mistakes that I make on a daily basis. I started out drawing Ceridwyn as an older character. After I had shown my first mock up to my agent, she suggested that I adapt a character that I had been working on for another story and draw Ceridwyn in this style as a younger girl.
After a few basic sketches I realised that she was right and that Ceridwyn was much more appealing as a younger character. So that’s where I am up to with her at the moment. I will update as things progress.
Posted by Unknown at 12:45 PM 1 comment: 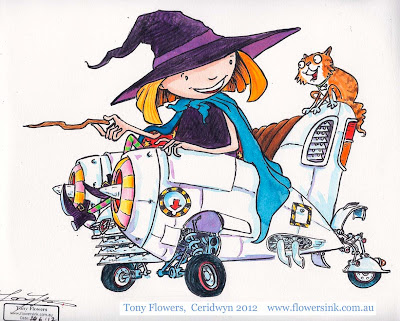 I am working on a story that I intend to pitch for publishing at the moment. It started as an idea 2 years ago and has grown and refined itself along the way. The story is of a young witch who's name is Ceridwyn. For the non-Welsh of us, it is sounds like Kerr-id-wen. I have attached a sample image of her and her cat Miffy (Miffanwy another fine Welsh name) casing a spell.

I will try and upload some interesting Ceridwyn character development sketches in a while.
Posted by Unknown at 12:20 PM No comments:

Email ThisBlogThis!Share to TwitterShare to FacebookShare to Pinterest
Labels: witch 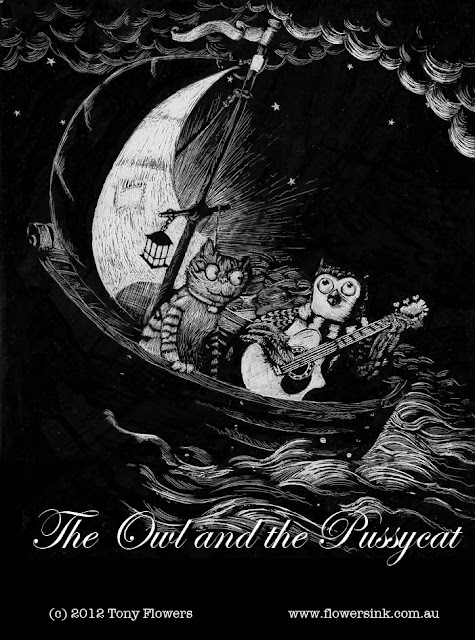 In an extension on my scrapper paper experiments. I have been playing with clay board. Now scrapper paper is like a version of scrapper board. As is clay board. With the clay board you start with a white board, coated in a fine ceramic film. Then you apply a couple of coats of your favourite ink (in this case a Langridge drawing ink (Carbon Black)). Once dry you scratch back though the black surface to reveal the white. It is a wonderful working surface. Where the paper version tends to grab you nib or scraping point as you scratch, the board is a much smoother working surface. This results in finer and has more fluid lines. I have created this image of the Owl and the Pussycat as it is one of my favourite poems. I plan to do some more illustrations from this poem.
Posted by Unknown at 4:41 PM 2 comments: