Today I build a tin robot out of Meccano. I will be using these as models in for some illustration experiments that I plan to do in the coming weeks. 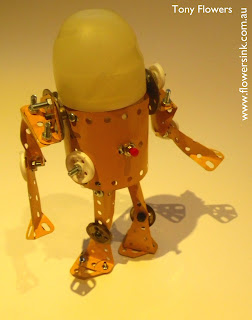 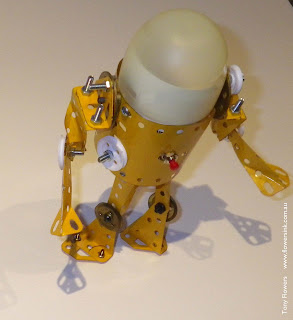 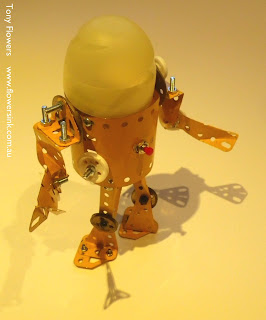 Posted by Unknown at 8:41 PM No comments:

You will have no doubt seen the amazing 3D street art pictures that get emailed around. Ever wondered how they created them. I will go through the basics for you.

I was lucky enough to head over to the Sarasota Chalk Festival in Florida, USA a couple years back. I was attending the festival as a guest artist. As I normally work on paper and not 3D optical illusions. I was drawing a 2 D picture based on Japanese wood block print that year. 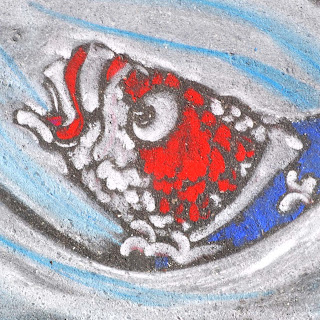 detail from my chalk work. 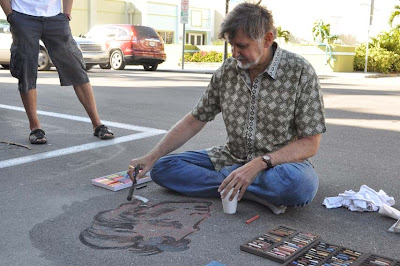 Kurt Wenner, one of the 1st 3D street artist in the world was running some workshop on the techniques of 3D art for chalk artist. 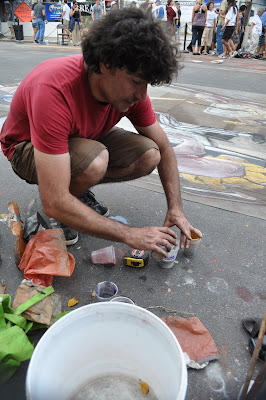 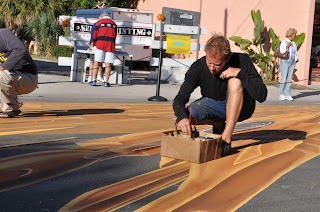 Leon Keer (just to name a couple of the incredibly talented arts) working.

The principals are quite simple, designing the work can be hard. Some basic point;

1.     All the 3D illusions are based on a fix viewing point. At all other viewing points the image is distorted. 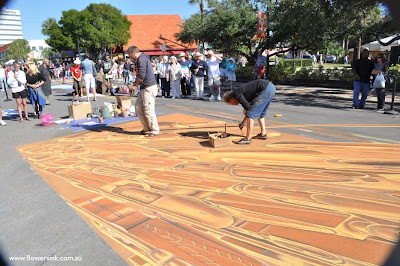 2.     A single focus point as gained in photographs from this fixed point complete the illusion. The human brain and stereo vision is harder to trick (in most of us). This is not to say things don’t look 3D when you in the street. If they are big enough they do, but they ‘pop’ more in a single focus point instrument like a camera or viewing lens.
3.      Few people have the brains and mathematical ability of Kurt Wenner, most modern street workers (certainly all commercial 3D artist) would use a software package to plan their designs. A program like ‘Sidewalk 3D’ by BionWare is cheap and works well. See http://www.bionware.com/3D.php 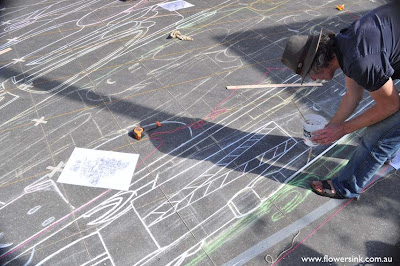 4.     The illusion operates by altering a persons visual reading of the world around them. Our brains organises all we see with the understanding that perspective alters how we see. Simply put, things that are further away look smaller than they are.
5.     Perspective starts to take effect on a horizontal (the ground) surface, when a viewers line of sight decrease below 45 degrees. i.e height from ground to eyes is the ‘point of view. The same distance to a point on the ground will result in a 45 degree view point.
6.     Images laid on the ground beyond this point distort. To make the illusion work, you have to distort the original image to counteract the effects of perspective. I strongly recommend looking the Sidewalk 3D software.
7.     Point of view can be controlled in the street buy drawing 2 foot prints on the asphalt with the instructions ‘Stand Here’. 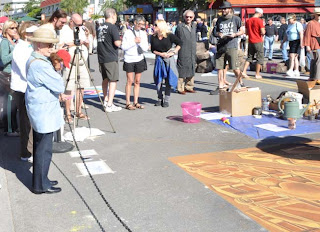 That is the basics. I have left out the gruelling pain that results from 3 days working, bent over on hot tarmac, in the blazing sun, on your knees, rubbing the skin off your knuckles as you work.

You will find lots of demonstrations done on Youtube, but nothing beats seeing it done in the real world. Next time you see someone chalking in the local plaza or hear about a chalk festival, check it out. You will be amazed.
If you wanting have a go, start small and then work up in scale. The 1st step is as always, to start. 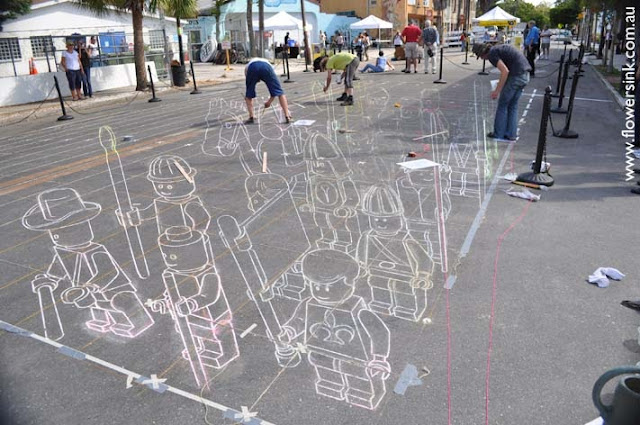 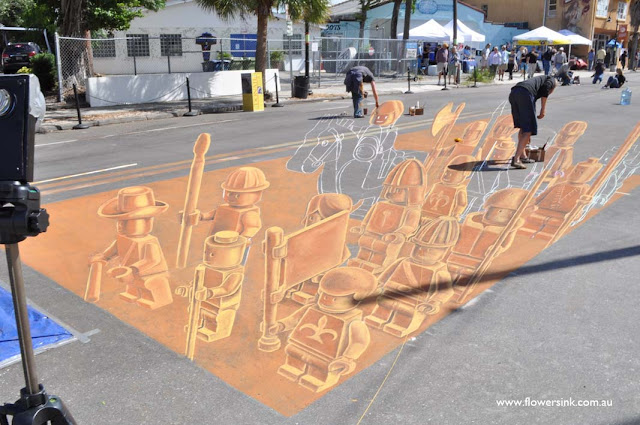 If you have found this interesting please, follow this blog. If you prefer you can always follow me on Face book at https://www.facebook.com/pages/Tony-Flowers/346821335385883 or find me on Pintrest at http://pinterest.com/flowersink/boards/

Posted by Unknown at 7:53 AM No comments: 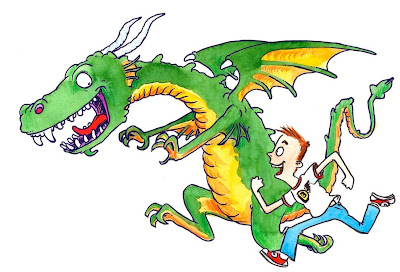 When a man armed with glue sticks stands before a room full of young children and encourages them to create pop-up books, there's a great deal of potential for things to go horribly wrong. But this is Australian illustrator Tony Flowers - conducting a workshop at Paddington's Sherman Contemporary Art Foundation - and before long, the children are hunkered down on the floor in deep concentration, the room is littered with scraps of coloured paper, and pop-up mermaids, sausage dogs, dragons, snails and even Eiffel Towers begin to emerge.
Flowers - who is wearing Batman shoes, socks and a matching belt buckle, feels at home with youngsters. He considers himself a big kid.
''I'm living my childhood dream; I've grown up to be an adult and I still get to draw pictures of dinosaurs as a job,'' the Tasmanian-born artist says.
Flowers, who moved from Hobart to Sydney last year, is the illustrator of the popular Saurus Street book series, written by Nick Falk. The stories are about dinosaurs turning up in suburban backyards, and the illustrations are regular drawings rather than pop-ups.

The pop-up books Flowers makes are handmade one-offs. ''They're not printed and they've primarily been produced either for an exhibition or a competition,'' he says.
While other countries, including Japan and the US, are experiencing a revitalisation in pop-ups, the Australian publishing industry doesn't consider them an economically viable option, because the local market is so much smaller.
''I'd love to commercially produce pop-ups but I can't find a publisher that's willing to take the risk at the moment,'' Flowers says.
Flowers taught himself how to construct 3D illustrations. He pulled apart pop-up books he owned to figure out how the mechanisms worked and mastered the skill through trial and error. He uses a similar strategy at the workshop, letting the children learn at their own pace.
Flowers made the leap to professional illustration almost 13 years ago, after working as a hospital orderly, glass-blower, postie and, finally, a customs officer. During this time he submitted portfolios to publishers and created pop-ups for competitions.
''I'd do all the pencil work on the bus to work, lunchtime I'd do the ink work, then I'd go home and do all the computer colour work,'' he says. ''I might be up until two in the morning making pop-ups, and then I'd get up and go to work the next day. That's probably when you'd meet the grumpy customs officer!''
Flowers' late-night efforts won him a prize at Japan's 2010 Oshima International Handmade Picture Book Competition, for his pop-up book Gaijin Holiday, a wordless, fantasy version of his sons' engagement with Japanese culture on a family holiday.
Having grown up watching Astro Boy and Kimba the White Lion, Flowers is drawn to Japanese folklore and samurai legends, which influence his work. In Saurus Street book No.5, to be published next month, he has ''given a bit of a nod to the Japanese woodblock print''. 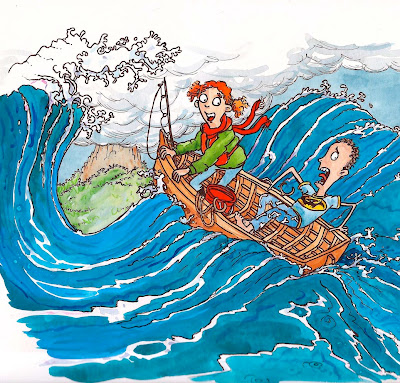 Despite his passion for pop-up, standard book illustration is still Flowers' first love. With the Saurus Street books, for example, he was contracted to do 40 pictures for each book and ended up doing 80 to 100. This turned out to be a real boon. The series has proved popular with reluctant young readers because of its many drawings. Book one has been shortlisted for Speech Pathology Australia's 2013 Book of the Year.
The fruitful professional partnership between Falk and Flowers came from a chance meeting. They met while Flowers was walking his dog on a Hobart beach two years ago, when Falk was a fledgling children's author.
''Nick told me he had a series about dinosaurs and couldn't find an illustrator for it,'' Flowers says. ''I read the first chapter and thought it was hilarious.''
Dragons are the shape of things to come, as the pair work on a new series, Billy Is a Dragon.

Posted by Unknown at 7:37 AM No comments:

Up coming events and News

I have a busy month ahead. Apart from a number of school talk with Nick Falk in and around  Sydney, this coming weekend I should have an interview Published in the Sydney Morning Herald Spectrum. http://www.smh.com.au/

On the 31st of August I should be appearing on Saturday Disney, demonstrating the 3D optical illusions that Chalk artist use. http://au.tv.yahoo.com/saturday-disney/

On the 7th of September (Saturday) I will be appearing at ‘Stories Alive!’ – festival, Korgrah Library (10am to 1pm) http://www.kogarah.nsw.gov.au/community-and-culture/events/stories-alive!

On the 21st of September (2:30) I will be at the CBCA NSW AGM as a part of the Author Showcase, http://nsw.cbca.org.au/pages/events.html 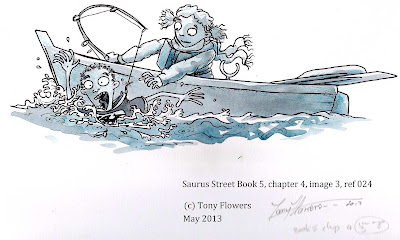 Posted by Unknown at 6:44 PM No comments: 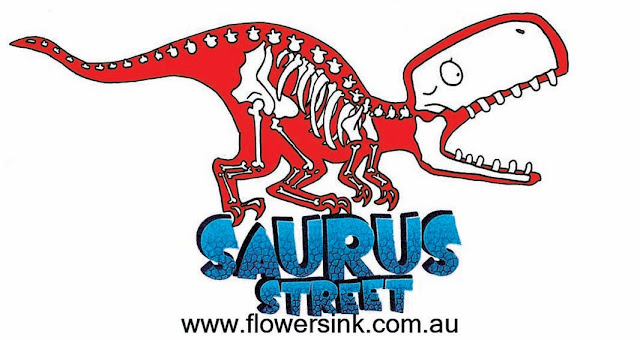 For a gallery of my illustrations follow the link below.....

http://tonyflowersillustrator.tumblr.com
Posted by Unknown at 6:24 PM No comments: